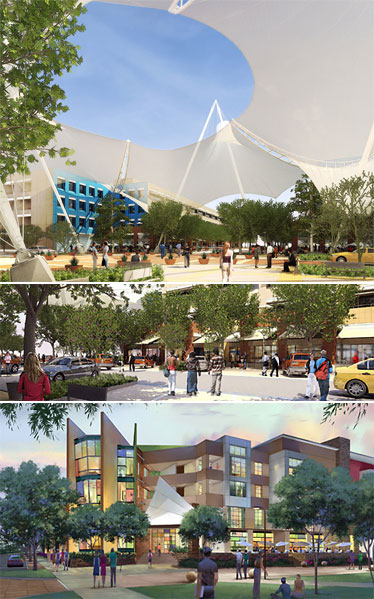 Arizona doesn’t exactly have a reputation for placemaking, but Arizona State University is looking to change that in a grand way with their Next American University plan to accommodate 90,000 students via two new urban campuses, one north of Phoenix, one in its downtown. Then there’s ASU’s take on what university research buildings should be, a microcosm of University of South Carolina’s Innovista research village.

Skysong, aka the ASU-Scottsdale Center for Innovation, is a 37-acre, ten-year, 1.2 million s.f. project that will provide 4000 jobs and $300 million in investment via office space, retail and housing, centered by an artistic tent-like structure.

The city’s key goal of course, is to leverage the university to create high-growth jobs, export its innovations, attracting global companies as partners, and developing entrepreneurial and tech transfer programs (eg Technopolis, the Edson Student Entrepreneur Initiative, and the Partnership for Research in Spatial Modeling). The ASU Foundation bought the land for $41.5 million, then sold it to the City who is leasing it back along with financing its infrastructure.

Now the urban design of the large mid-rise industrial-looking buildings aren’t the most humanistic, but at least it’s not parking lot-oriented. It’s a step in the right direction.

Read more in The Next American City.