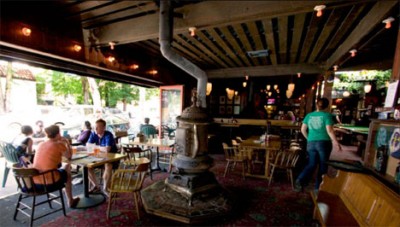 It’s the age old debate – the environment vs the economy. CEOs for Cities’ recent report, Portland’s Green Dividend provides evidence that the two are synonymous.

The key statistic* in the report is the following:
20.3 miles/day – average Portland commute
24.3 miles/day – average commute in the 33 most populous metro areas
What does 4 miles/day add up to? Figuring in a conservative $.40 mile, that translates to $1.1 billion. Then add in $15/hour for the 100 million hours saved, and that’s another $1.5 billion for a total of $2.6 billion a year.

Now here’s where it gets interesting – where does all that money go? Where it doesn’t go is outside the local economy, as 90% of automobile expenditures leave the state. While there’s no way to know for sure where people spend their money instead, is it a coincidence that Portland has the second highest number of restaurants per capita among the metro areas? It’s probably also not a coincidence that it has more microbreweries per capita than any other major city.

It’s also a common rule that housing dollars and transportation dollars are inversely proportional and Portlanders spend a greater percentage of their incomes on the value of their homes. Now, would you rather have greater value in the experience of the destination, or in the experience in getting there?

Still, even when it comes to ‘getting there’, compared to other metro areas, bicycle commuting is seven times more popular, hybrid car ownership per capita is the highest and the rider rating of its mass transit doubles the national average. Does this mean Portland is ready for promenades, paseos and piazzas?