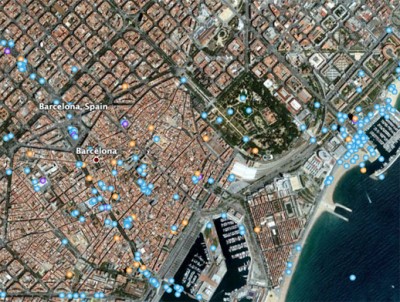 As stated just previously via Spiegel’s review of Europe’s Coolest Cities, an impressive 43.9% of Barcelona’s workforce is represented by the creative class.

Via the google earth image, you can see the cultural amenities centered in the historic pedestrian district and the fruits of the 1992 Olympics on the far right. Notice how transportation takes up increasingly more real estate each year, from a miniscule amount in the historic core, to its surrounding neighborhoods directly north, to the 20th century toward the east. Not surprisingly, the cultural center is in the most walkable part of the city, highlighted by La Rambla – a continuous street that behaves as what seems like a never ending public square of merchants by day and outdoor diners by night.

Such creativity drives a progressive agenda, such as the 2004 Universal Forum of Cultures, a world expo for peace, human rights, sustainable development and diversity where mundane utility buildings were redesigned as hip new environmentally friendly structures, one of which has become a new Barcelona landmark.

Creativity and progressiveness in turn drive the economy. One transformational knowledge-based undertaking is the 22@Barcelona (why it’s called that, it’d be nice if someone commented below), 500 acres of industrial urban area that’s being redeveloped into a world-class creative class district based on media, IT, communications, energy and biomedicine, resulting in 150,000 new growth-based jobs. Here’s hoping it passes the postcard test.

Thanks to Mike Lydon of DPZ & Company for the reference.