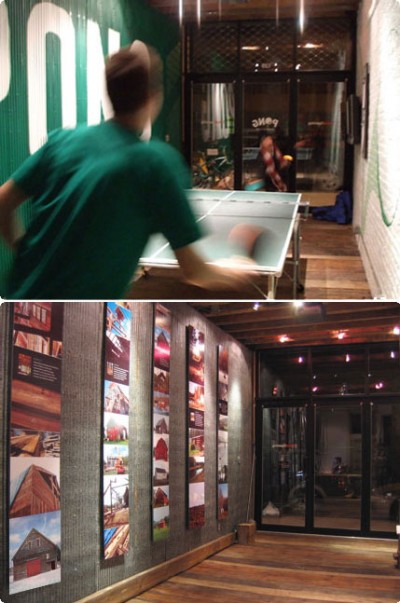 First of all, authentic trendiness is practically an oxymoron, which is why you probably never heard the term. While authentic refers to being true to one self, trendy tends to follow what others think is hot. However, one pop-up retail store in Manhattan (surprise) actually intertwines the two quite effectively – at the 350 s.f. Grand Opening.

Since trendy stores by nature go out of fashion sooner or later, Grand Opening has taken it upon itself to take that trendiness in a truly authentic way – to literally reinvent itself as a completely different store every few months, something no one else has dared to take on to the same degree. Currently, from March 21 to September 10th, 2007 (that’s right, next week Monday), it’s known as Pong, featuring a single rentable ping pong table with a webcam so you can see if it’s being used or not. Prior to that from December 12-March 21 it was Barn for Sale, which restored and relocated original timberframe barns and materials either as barns or new homes.

What’s next? A mock-up drive-in for six people in a classic car featuring a classic movie.

No reason why this concept can’t be used in a section of a larger store or restaurant. Started by a couple of entrepreneurs with experience in designing exhibits, one thing’s for sure – the store will never go out of style.