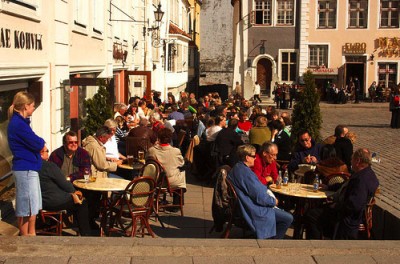 Where?!!! That’s probably a fairly common reaction. Located south of Finland and bordering west of Russia, this fast-growing city of 400,000 enjoy life on the fast lane as far as the internet goes, but it’s key to success is being able to maintain life its enviable slow city, slow food culture.

Summarizing Tallinn’s profile in Spiegel as part of its Coolest Cities story:

The internet is essentially free throughout what is known as the most-wired country in Eastern Europe, with the government committing to providing free internet access as a basic right. The city even has a name for their mission to wire the entire country, ‘tiigrihÃƒÂ¼ppe’ (tiger leap). As a result, since gaining their independence in 1991, Tallinn is:

– reputed as the “Hong Kong of the Baltics”;
– one of the seven most intelligent cities in the world“;
– referred to as the “boom town of the new Europe”;
– listed as one of the The 30 Fastest Cities to Work, Live and Play.
– serving as a gateway between eastern and western Europe.

90% of bank transactions are online, citizens vote for their government leaders online, all schools are online… meanwhile, citywide wi-fi plans are falling through in major U.S. cities. C’mon now.

It’s no coincidence that such a modern knowledge economy network and dedication to its usage has indirectly resulted in Skype locating their research division in Tallinn; the town’s programmers are in demand globally, and the city sponsoring an alternative hangout in a renovated factory for artists and ‘grunge parties’.