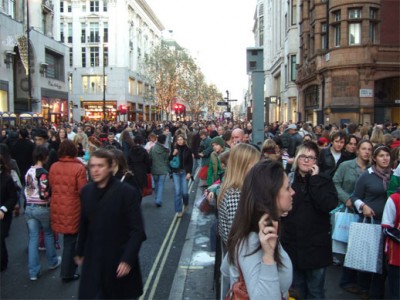 Succeeding generations really do want more pedestrian-oriented downtowns, and cities are starting to recognize that, such as London with its auto congestion pricing.

In 2003, Mayor Ken Livingstone enacted a congestion charge of $10 per day for auto usage within the central city. Congestion is down 25%, and so is air pollution. After an initial drop of 7% in retail sales, it has since not affected the city’s economy, and its popularity has increased to the point of allowing it to be raised to $16 earlier this year, as well as being expanded to other regions (Kensington, Chelsea…)

Other programs to promote pedestrian traffic:
– Rome has strict emissions standards for all vehicles in its historic core.
– Copenhagen, Denmark has a fuel surcharge for downtown travel, and implemented a ‘safe routes to school’ program that ensures schools can be accessed by safe, walkable and bike-friendly paths.
– In London, in the decade before 1995 more than 600 parking spaces were removed from the inner core, and recent policy allows new development only within 1 km (0.6 miles) of a transit station.
– Many European cities are completely car free in parts of their historic core, which you can find here.

Read more about how European cities are taking the lead in the ULI article, Change of Climate.