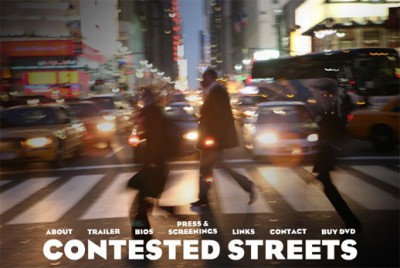 If you’re trying to convince city and business leaders in your city to plan a more creative, people-oriented destination for current and future generations, it sure wouldn’t hurt to have them watch Contested Streets, a new film produced by Transportation Alternatives.

You can watch a few minutes of the 57-minute production here on YouTube, and I must say that the one second of footage at the 2:54 mark is almost surreal – why can’t more cities have scenes like that. It should be no surprise that it’s a shot of a pedestrian-only square in Copenhagen, coincidentally profiled here this week. Copenhagen enjoys a reputation as having the ‘happiest people in the world’ as well as being among the most progressive economically. You can see why given all the images of street life without cars in the film.

The short answer in the film as to why the U.S. is severely deprived of such pedestrian-prioritized places is simple. Elections. The majority of the current population is car-oriented and city governments will keep it that way as long as voters do. Ah, but that’s slowly changing, and it’ll be just a matter of time before a the tipping point occurs. In the meantime, perhaps beta communities will crowdfund such places in spite of the current generation of ‘leadership’.