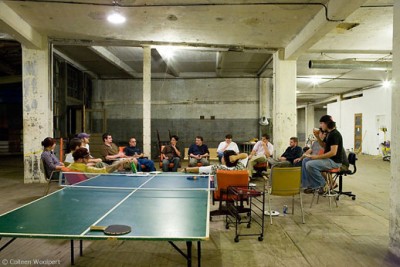 What kind of space do artists and musicians want in the city of Syracuse? The simplest way to find out is to ask them, which is what developer Rick Destito formally began doing Tuesday night last week on the first floor of his 5-story, 65,000 s.f. warehouse (pictured), which Rick (brown shirt, hand in motion) is committed to transforming into an artist/musician live-work community (see rendering here).

Here are a few key discussion points from the beta community meeting:

Naming the building: Based on discussion at the project’s beta community site, Rick announced it would be called The Gear Factory, with website to come at www.gearfactorysyr.com, being designed by building member, Michael Heagerty.

Compensation for participation: The group began exploring the idea of profit-sharing based on individual sweat equity, initiated by Rick.

The vision: The members discussed on what the building will be known for – a reputed art center, collaboration, community. They also brainstormed on a slogan for the building, which is continuing online.

Manifesto/charter/declaration: The group began defining the principles the building will stand for via a document that Rick will use to maintain the building community’s integrity.

Keep track of all beta communities by signing up here.

Image by Colleen Woolpert, a photographer tenant at The Gear Factory.