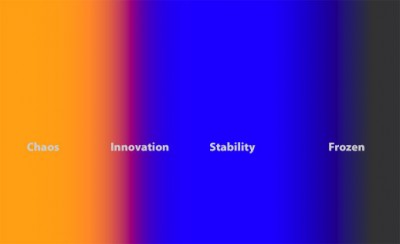 In science, the ‘edge of chaos’ is the region between order and complete randomness or chaos, where the complexity is maximal – where innovation and survival is most likely to take place. Then there is death or inanimate, where things are ‘frozen’.

The City of Littleton, Colorado, the founder of economic gardening, has pioneered research on the edge of chaos as it applies to cities and the three phases of life, to which organizations and economies naturally apply.

Frozen phase: “No information gets transferred and no activity takes place, so it is impossible to adapt.” Know any companies like this?

Chaotic phase: Information and change takes place so fast that nothing is stable enough to retain its identity.” Thus, the dot com crash.

Stable phase: A regular rhythm of activity in which identity is retained but adaptation to changing conditions is slow. The status quo. Human nature.

While humans may believe the stable phase leads to survival, it’s actually at the edge of chaos and stability (a very fine line) where long-term survival flourishes, allowing constant adaptation to evolve according to ever changing environments and conditions.

In Littleton, the local businesses realized they needed to operate at the edge of chaos to rapidly adapt and innovate to survive and grow within the growing presence of Walmart, as well as to fill the void left by the deterioration of once majestic industrial age companies like GM. At the edge of chaos, businesses know that breakthroughs happen from breakdowns, and that “success is going from failure to failure without loss of enthusiasm.” (Winston Churchill).

In other words, creativity and innovation happen at the intersection of fire and ice.