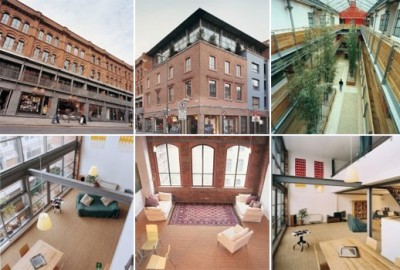 The development firm Urban Splash’s pioneering founder, Tom Bloxham was profiled in the previous entry, so now it’s fitting to present one of his signature projects that initiated the loft movement in Manchester, England. It sparked a transition from a built environment designed for the industrial economy, to a knowledge-based one.

Constructed before 1904 as a major department store (Affleck & Brown), the Smithfield Buildings, a group of nine buildings covering a full city block in Manchester’s city center, endured thirty years of rapid retail turnover until Urban Splash acquired them in 1996. With a keen eye toward what creatives wanted, as explained in Tom’s story, the development became an instant hit, with 80 loft apartments surrounding a central light-filled atrium (top right) and garden, a gym in the basement, and several shops and cafes on the ground floor. With views of the street on one side and a garden atrium on the other (bottom left), residents enjoy an outdoor connection on dual sides…

Here’s a review by one such resident, “The best thing about my apartment is the location. The next best thing is my large terrace, which runs the length of my lounge and is about eight feet deep. I like the character of the apartments and the original features, such as cast iron columns and beams, which make the building more interesting and unique.”