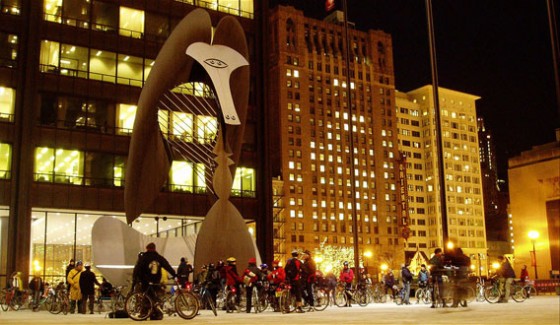 Starting out 15 years ago on September 25, 1992 in San Francisco as a group of 48 bike riders making a stand against traffic, Critical Mass has since become a cultural phenomenon in hundreds of cities and dozens of countries, from India to South Africa to Russia, and of course Hungary and Denmark.

Every last Friday of the month after work up to a thousand or so bikers meet at a common point in a city and take off on an unplanned ride through the city. Although the initial rides caused quite a ruckus (obviously, commuters in cars affected by the riders hate it), it has since become respected by mayors worldwide. Productively, maybe it should be regarded as a once a month incentive not to drive home after work, or even better, to bike home.

Find details on the Critical Mass ride in your city here.

Image source: Critical Mass in Chicago – in the winter, aengusanderson