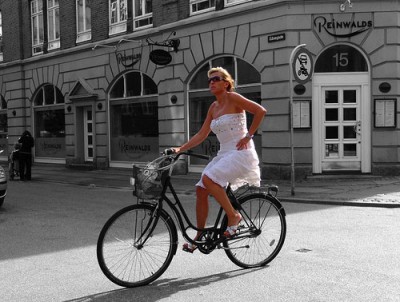 Inspired by the huge political, social and economic success of Paris’ bike sharing system, U.S. cities are looking for ways to instill a more profound biking infrastructure and culture. In Europe, a woman in a dress on a bicycle is the norm, while in the U.S. it’s a curiosity.

In a USA Today article, Big cities try to ease way for bicyclists, several cities are at least talking about big changes to support a more authentic biking culture:

New York City is creating the first ;a href=”http://www.streetsblog.org/2007/09/20/nyc-gets-its-first-ever-physically-separated-bike-path”>special bike lane on Ninth Avenue with a planter separating cyclists from motorists and parked cars. Mayor Michael Bloomberg promises 200 miles of bike lanes by 2010.

Chicago Mayor Richard Daley has a goal of 5% of all trips shorter than 5 miles to be taken by bicycle by 2015, and already launched a pilot based on Paris’ bike sharing system in July.

San Francisco Mayor Gavin Newsom plans to have at least 10% of all trips in the city to be made by bicycle by 2010, and the City will make a decision next month on whether to implement the Paris bike sharing system (which by the way, was started in Leon, France).

Image source: Leopold Estaban. You know the picture wasn’t taken in the U.S., otherwise the sidewalk would be lined with cars.