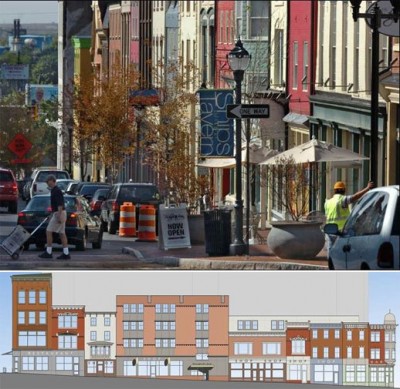 The name ‘Delaware’ doesn’t exactly roll off the tongue when naming places to be, so the folks in Wilmington had their work cut out for them. The transition of a neglected area into what is now being billed as the LOMA Design District is a good example of economic revitalization and destination building, but not a great model if you’re sensitive to gentrification or a typical creative because most of you probably won’t be able to afford living or leasing there. Think ‘Meatpacking District’ in Manhattan – beautiful, active nightlife, upscale.

The transformation of the LOMA district has the efficiency of a corporation, and that reflects the top-down lead taken by city government and business leaders. They brought in the ideal developers, such as Preservation Initatives and Struever Brothers Eccles & Rouse. They’re investing in an entire streetscape renovation**. They built office space for over 500 workers. They’re avoiding national chains (major kudos on that). They have a professional marketing program, coming up with the LOMA name and website.

However, what’s missing is a little bit of soul and authenticity. The ‘creatives’ they’re seeking are high end furniture sellers, architects (who seek out upscale venues), and marketing/design firms (ditto). As one retailer put it, “We’re trying to hold the bar up really high, and set the standard for other businesses coming in.” The new office space is all luxury/Class A. At least this may provide some momentum for the ‘rest of the creative class’, the majority, to crowdsource their own more relatable destinations somewhere nearby.

**The city seems to be stuck behind the trends. First, they implemented a pedestrian mall in the 1970s just as downtowns were draining of people, ensuring its demise. Now, just as pedestrians-only streets are starting to make a comeback amid an urban and green consciousness, they spent millions to tear it up to bring in auto traffic, a major missed opportunity at establishing an iconic regional destination. This likely wouldn’t have happened with a beta community involved.