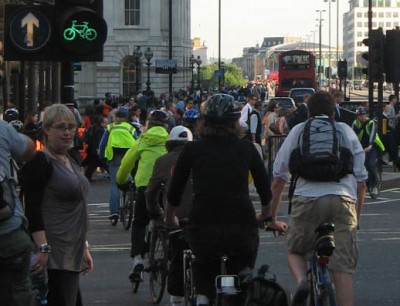 I don’t know what it is, but this seems to be the year of the bicycle…

Based on criteria (see below, which are very U.S. oriented, thus skewing the rankings significantly) provided by the League of American Bicyclists, Virgin Vacations presents the 11 most bike friendly cities in the world:

1. Amsterdam, Netherlands – You have to check out the video on the site – amazing, though it may help to ignore the rather nerdy-sounding narrative. 40% of all trips are by bikes, and there are more bikes than cars. They get their own streets and even traffic lights.
2. Portland, Oregon – One of the most progressive cities in the U.S., up to 9% in some neighborhoods commute by bike.
3. Copenhagen, Denmark – Home of the world’s most successful (and free) community bicycle program, which says a lot given all the press for Paris bike sharing. 32% of workers overall commute by bike, which dwarfs Portland’s numbers.
4. Boulder, Colorado – Spends 15% of its transportation budget on bike related programs.
5. Davis, California – The city’s logo is a bike – what more can you say? 17% of Davis residents commute, and it’s university has been a proponent of alternative energy for decades.
6. Sandnes, Norway – A cycling pilot small town in 1990 that has become a true bike city since.
7. Trondheim, Norway – Home of the famous ‘bicycle lift’, the Trampe, profiled in the previous post.
8. San Francisco, California – 40,000 commute to work in the second densest city in the U.S.
9. Berlin, Germany – Less than half of its residents own/want/need a car, and cycling has doubled in the past decade.
10. Barcelona, Spain – Established their own near-free bike sharing service last spring – more here.
11. Basel, Switzerland – Blending bicycling from the downtown to the beautiful countryside in this small city.

What’s missing is a sixth ‘E’ – Environment, and in many ways the most important: Is the city’s overall urban fabric oriented toward bicycling, and is there a cycling culture that significantly compares to driving? For instance, Amsterdam’s city core has no cars, and that contributes more to biking than any of the other criteria by far.