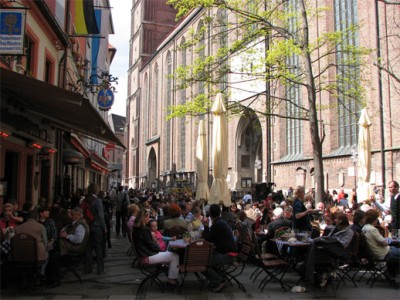 Shouldn’t there be a multimedia magazine by now that captures cool culture, business and design from around the world? As of earlier this year, there is now a contender to take on that role, Monacle Magazine. They’ve teamed up with the International Herald Tribune to provide an international multimedia city guide for compelling, creative places to check out.

Some of the highlights (links to these are on the left of the online guide):

The 25 Examples of Good Urban Design is a fun look at the details that define a city, like the bike lift profiled previously, or the open air cinemas of Athens (one of the 25 examples). Slide shows illustrate these examples, as well as the top cities, especially the top two (Munich, Copenhagen).

At the Cityscapes link, read about how individuals helped define their city going about their own business. Under Videos, one is an animated, narrated slideshow of the aforementioned examples of good urban design, and another lays out the best main street businesses from around the world to create the ideal city street in the vision of the Monocle editors (though maybe too many chains).

Finally, the highlight in my opinion is Globespotters, a crowdsourced blog of sorts with people posting photo vignettes of their experiences from around the world.