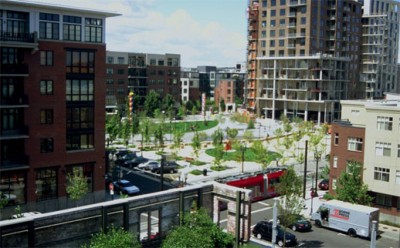 Believe it or not there are still parties out there that argue against higher-density developments built around transit stations, predicting they will cause traffic congestion as a result of more housing units present.

Thankfully, research for the Transit Cooperative Research Program provides some evidence for the logic that assumes fewer auto trips will result simply because people will take transit or walk more often, and drive less. The numbers are pretty convincing proving this is the case.

From 17 surveyed TOD-housing projects, the study found the following results for three different times of the day:

The ramifications are multifold:

– TOD developers have reason to pay lower traffic impact fees per unit.
– Transit officials have more evidence that people drive less when living near transit stations.
– Nearby residents have one less reason to argue against high-density development. However, the main reason neighbors fight against such projects often has more to do with a misguided perception of socioeconomic differences (ie poor people live in high-density housing).
– Cities can lower minimum parking requirements which are often way too high, resulting in too much parking, unnecessary costs and a less attractive development.
– All the above helps lower housing costs.

For more details, check out this Planetizen report.