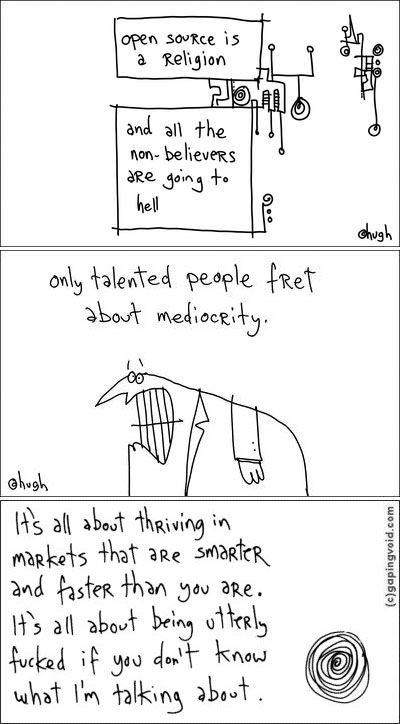 Continuing our look at Gapingvoid’s tips on How To Be Creative as applied to cool towns and beta communities, from the previous entry…

11. Don’t try to stand out from the crowd; avoid crowds altogether. Keep in mind ‘crowds’ as defined here means ‘markets’. Don’t try and stand out by attempting to build an even better place and then selling it, but avoid that model altogether and co-develop it with people who share your values and principles, and it’ll already be sold when it’s built.

12. If you accept the pain, it cannot hurt you. This applies to the risk-takers and early adopters who pioneer revitalization in a neighborhood – they readily accept the negative consequences of being the first ones, and thrive on its gradual evolution.

13. Never compare your inside with somebody else’s outside. This relates to rule #7, the Sex & Cash Theory, where something you find spiritually rewarding is extremely difficult to make a living from without feeling like you’re ‘selling out’. The great thing about cool town beta communities is that there are always others who find it more spiritually rewarding than you.

14. Dying young is overrated. This is the value of establishing a community for creatives – a slew of drug-tastic artistic geniuses died young because they couldn’t bear the pain when they were alone. Genius needs company.

15. The most important thing a creative person can learn professionally is where to draw the red line that separates what you are willing to do, and what you are not. The most significant red line when crowdsourcing a place is knowing what decisions the developer/building/business owner is willing to let the group make, and which they aren’t. For instance, the number and type of residential units may be decided by the group, but the final exterior designs may be left to the developer’s professional design team.

16. The world is changing. This is the context under which beta communities are most valued, providing a collective intelligence in a vastly evolving world is the only way to truly compete anymore (see YouTube and eBay).

17. Merit can be bought. Passion can’t. Beta communities aren’t made up of the most qualified in development, planning and policy, they’re made up of the city’s most passionate about experiencing inspiring places. It’s up to the developer to bring in the expertise to facilitate that passion into built reality.

18. Avoid the Watercooler Gang. The Watercooler Gang as defined by gapingvoid are the people who gather to complain about the jobs they’re inevitably going to leave or be fired from. That’s because they have no control of the future. Beta communities are literally about defining that future, and complainers need to be reminded of the group’s manifesto declaring why they have such a passion for the development they’re co-creating.

19. Sing in your own voice. Beta communities and the developments they produce are only as good as how much its members self express themselves honestly, genuinely, authentically.

20. The choice of media is irrelevant. When it comes to beta communities, it doesn’t matter if you express yourself via music, painting, film, writing or business, as long as you express yourself and contribute to making the place happen. All that stuff about artists thinking business guys are sell-outs or business guys thinking artists are slackers… irrelevant in a beta community.