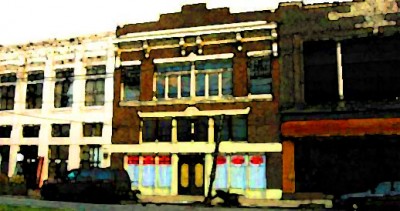 “Never doubt that a small group of thoughtful, committed citizens can change the world. Indeed, it’s the only thing that ever has.” Margaret Mead

Within a couple of months, a hundred of them established a beta community to identify development opportunities they could crowdsource into a model of what New Orleans could be, known as the NOLA Yurp Beta Community. Less than one month after their first meeting on September 26, 2007 they identified an interested building owner, Lee Stafford, located in the economically-challenged neighborhood of O.C. Haley near downtown).

On November 14, 2007 they held the first beta community meeting to rebuild 1618 O.C. Haley (pictured, center building) into a community-oriented, green, socially-conscious coffeehouse that will feature local talent, art and music, and in December launched the online beta community groupsite, aka Rebrew Orleans, which grew from 28 to 65 members this past week as design, environmental, branding and events teams began to form.

The energy continues to rise… there’s now a motivated effort to establish a coworking site above the coffeehouse, and another building owner across the street has already proclaimed, “I’m next!”

Keep track of all the CoolTown beta communities here.