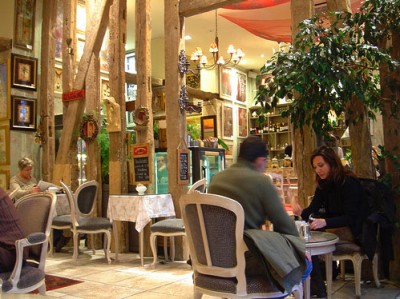 While not every city can be classified as a recognized global city, one can take the spirit of its characteristics and apply it to becoming a global-minded neighborhood. This is especially relevant given that diversity is linked to economic growth.

The following are the elements of a global city, followed by how a neighborhood can apply its mentality:

– International, first-name familiarity – “Paris” (pictured), not “Paris, France”. Neighborhoods that don’t need the city’s name attached include the French Quarter and Greenwich Village – that’s when you know your neighborhood has become a world unto itself. No coincidence that such places tend to be walkable, creative, human-scaled.
– Influence on and participation in international affairs – While a global city will host international summits, a global-minded neighborhood will have a day-day international online social and business network. Outsourcing here isn’t politically incorrect, it’s survival.
– A fairly large population (at least one million, typically several million) – A global neighborhood need only have the density of a global city, not the size, to ensure constant, spontaneous physical connections that lead to virtual international ones.
– A major international airport – A global-minded neighborhood won’t have an air hub, but it will have comprehensive broadband wi-fi to allow multi-person videoconferencing.
– Freeways and/or a large mass transit network – Global-minded neighborhoods were fortunate to bypass the industrial age proliferation of freeways, and while they may not have sophisticated mass transit, they don’t need it if they’re inherently walkable – the most effective transportation infrastructure overall.
– International cultures and communities (ie Chinatown, Little Italy) – Diverse neighborhoods are too small to have ethnic neighborhoods, but they’ll have a reputation for being a hub of ethnic restaurants (like Adams Morgan) and immigrants.
– A lively cultural scene (ie film festivals; music or theatre scenes; art galleries, street performers) – A global-minded neighborhood will have smaller versions of all of these, and of course, representing music from all over the world.