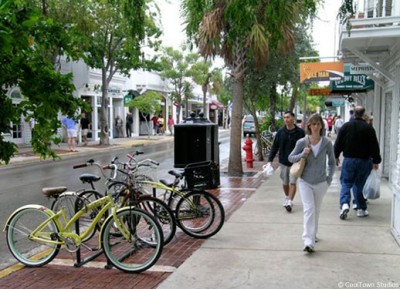 Key West, Florida is both a city and an island hosting a few facts you may already know: it has a population of 25,000; is a cruise destination; has phenomenal weather (except when I visited it); is among the Florida keys that originated the key lime pie; is only 90 degrees from Cuba; has the nation’s first and oldest continuous gay and lesbian chamber of commerce; was home to Ernest Hemingway; and maintains 200 of the 300 liquor licenses in the keys – half of which are on Duvall Street (pictured)…

…All of which makes for a very desirable destination where a majority of the community’s emphasis is on quality of life, and some very subtle placemaking cues resulted. For one, people found that its most popular corridor, the commercially vibrant Duvall Street, didn’t need streetside parking for cars, but rather sidewalk parking for bikes. There was something inherently relaxing, as is the mode of life in Key West, to walk down streets being able to see streetlife unobstructed by dual rows of parked automobiles.

Reinforcing that fundamental pedestrian-oriented difference from most American streets, sidewalks were wide, trees lined both sides, and shops maintained their own unique signage, many of which were local independents. Ah, but the essence of Key West’s vibrancy, while along the very public Duvall, was often very hidden… (see next entry)