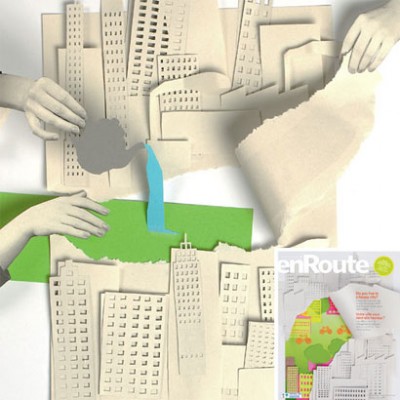 When you boil it down to the basic elements, the metrics of a place’s success answers the question, ‘Are the people happy?’ To some researchers, this is more science than art, as explained in Air Canada’s enRoute article, The Happy City. City mayors are making sweeping changes, most of which center on replacing cars with grand public third places.

University of British Columbia economics professor John Helliwell, who studies happiness and social connections, states that frequency of positive interaction is the key, so the more we meet outside of our cars, the kinder and gentler we’re likely to become.

Bogota, Colombia: Its mayor legislated the transformation of roads into parks and pedestrian “freeways.”

Mental well being is also the purpose behind the new car-less city of Mandar, profiled in this recent entry.