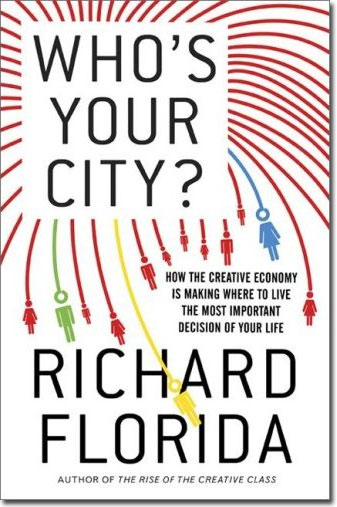 The book is organized into four parts.

Part I. Why Place Matters – explains why place is best described in terms of mega-regions, of which there are 40 in the world.

Part II. The Wealth of Places describes why the creative class is a primary reason these 40 mega-regions are the economic and cultural engines of the world.

Part III. The Geography of Happiness – looks beyond jobs and identifies the primary factors (aesthetics, openness) and personalities cities possess that are much better predictors of attracting the creative class.

Part IV. Where We Live Now – identifies the three big moves we make in our lifetime – post graduation/career development; when we have kids; and when they leave/we retire.

Finally, Rich provides a final chapter with tools to help you find your ideal city. You can start with the place finder on the Who’s Your City? website, which is a fundamental complement to the book.

You can listen to Rich via this Smart City Radio interview.