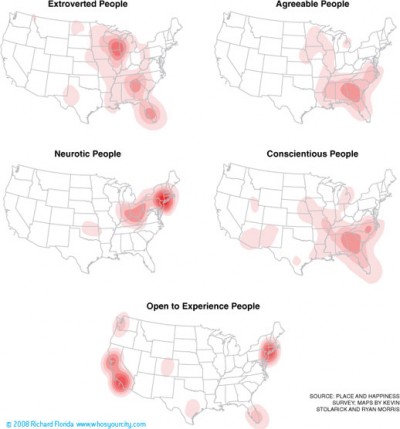 One of my favorite graphics in Richard Florida’s new book, Who’s Your City?, are the Personality Maps, based on the study, The Geography Distribution of Big Five Personality Traits (extraversion, agreeableness, conscientiousness, neuroticism, openness).

Two psychologists who worked on the study, Sam Gosling and Jason Rentfrow; Kevin Stolarick, responsible for much of the statistical analysis in Rich’s work, collaborated with Rich through surveys and visual analysis to produce the personality maps you see here. So what personalities correlated the most with innovation, human capital, income and housing values? (which in turn are all associated with the creative class, and we know why they matter.)

Positive correlation
Openness to experience people – acceptance ‘opens’ the door to new ideas and diversity, and thus innovation and productivity.

Negative correlation
Neurotic people – ultra-creatives tend to be emotionally stable, less volatile, more resilient.
Conscientious people – this is surprising, of course, but it’s important to note that this rises to the top when associated with openness. Alone however, they tend to be rule-followers (‘doing what’s right’ is often pre-defined) and struggle with being creative.

Graphic used with permission from the Creative Class Group, and viewable on the Who’s Your City? website.