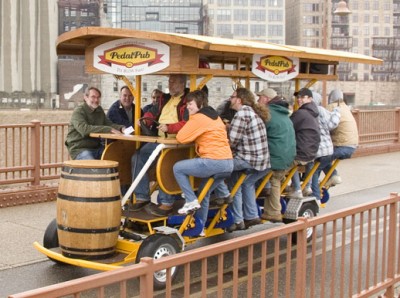 A year ago we profiled the conference bike from the Netherlands, which allowed seven people on one bike together – and have a ‘conference’ at the same time. Be it no surprise that the Dutch now bring us the Fietscafe (pictured above), or the PedalPub as it’s known (and distributed) in the USA. If the world has a biking scene, it’s hands down in the Netherlands.

This time instead of seven, there are fourteen people that can ride at the same time, each of them pedaling at their own leisure, with a roof, a bar counter, and a keg. To get the true spirit of it you’d have to check out a video and read a journalist’s personal experience.

The inventors, the Van Laar brothers, have built 31 of these bikes ranging in price from $30,000-$40,000, offering different versions with models seating from seven to seventeen people, designed for wedding parties, women or the non-drinking crowd. It has a top speed of 8 mph going downhill.

Think of it as the ultimate alternative to the Hummer limousine.

Thanks to Luke Graven for the reference.