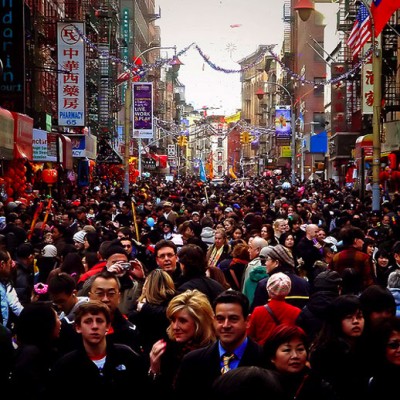 Anyone familiar with New York City, especially Manhattan knows that there simply isn’t enough room for the pedestrians. The NY Times takes a look at ten progressive pedestrian-oriented solutions that the city’s urban leaders are suggesting:

The Woonerf – Popular in the Netherlands (translates to ‘living street’), it’s a primarily residential street that does not distinguish between a sidewalk and road, designed to look and feel like an outdoor living room.

Play Streets – Not only are streets temporarily closed to allow kids to play in them, but there’s talk of closing some of them permanently for this purpose.

Bike Boulevards – More bike lanes to up the less than 1% of New Yorkers who commute by bike (mainly because there are too many cars).

Pavement Hierarchy – Rather than allowing every single street access to cars, have some of them reserved strictly for parks and plazas.

Lanescapes – A great example of taking it up a notch, ‘lanescapes’ are the application of ongoing events and scenes to a ‘green grid’.

Gentle Congestion – Urban micro-cars that flock like sheep using sophisticated sensors and navigation systems, even bumping one another slightly, thus the name, or even stackable cars.

Urban Acupuncture – Honestly, I don’t quite understand what the NY Times is specifically talking about here in terms of practical examples, but the idea is to inject the city with green pedestrian-oriented spaces throughout its ‘body’.