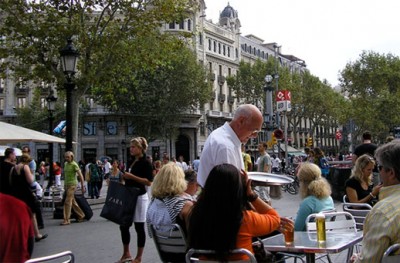 La Rambla, which translates to ‘intermittent water flow’, is the iconic hub of Barcelona, a predominantly pedestrian-only plaza stretching nearly a mile through the historic center of the Spanish city.

The central area is filled with outdoor dining areas, merchant kiosks and countless strollers, bordered on either side by traffic-calmed two-lane roads for cars, which are then fronted with restaurants, stores and residences. Servers (pictured) cross the traffic lanes to cater to customers in the plaza.

In fact, even when La Rambla ends, the streets beyond it are packed with outdoor diners – its energy extends beyond, as most inspiring places do.