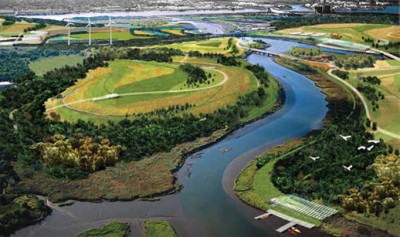 Not only are urban dwellers in select cities across the country about to enjoy their own Central Park, but ones that are even larger than New York’s 843-acre treasure, as reported in USA Today:

Staten Island, New York (pictured) – 2200 acres on what is currently the Fresh Kills landfill. You can’t ask for a better transformation than that, though let’s hope they don’t call it Fresh Kills Park. However, think of all the jokes…

Atlanta – The Beltline will connect 1400 acres on 13 sites by walking trails, trolleys and existing parkland.

Orange County, CA – Orange County Great Park will be located on 1347 acres of a former military air base, plus another 1000-acre wilderness area.

Birmingham, AL – Red Mountain Park is a 1100-acre tract atop Red Mountain generously sold to a land trust by U.S. Steel for $7 million. It’s valued at more than $16 million.

What’s amazing about this trend is that most of the country’s large urban parks were created in the 19th or early 20th century when land was much less scarce. The reasons?

– Our present environmental concerns and the rising green movement;
– The revitalizing impact of park-side real estate;
– Health-conscious people moving back to cities;
– Vacant industrial land from our industrial to information economy shift.

Looking forward to profiling these parks as they come to fruition.

Thanks to Erin Caricofe for the reference!