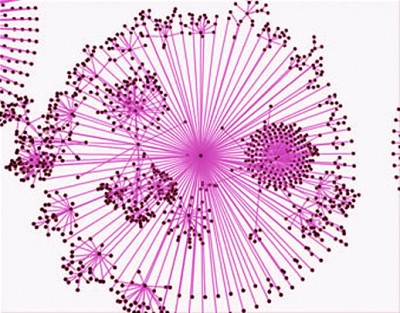 First of all, what’s a viral loop? Viral comes from viral marketing – using pre-existing social networks to produce increases in brand awareness or sales. A loop occurs when a person is invited to a social network, accepts the invitation, then either:
1. invites others themselves or;
2. creates their own social network.

Pictured above is a series of these viral loops, called a viral loop network. Viral loops and their networks have long been happening in the physical world (e.g. tupperware parties), but are taking off exponentially in the virtual world (e.g. Facebook widgets)…

…and to answer the title question, here’s an excerpt on this phenomenon from my favorite magazine, Fast Company, featuring Ning, the most popular social network platform,

“Viral loops have emerged as perhaps the most significant business accelerant to hit Silicon Valley since the search engine. They power many of the icons of Web 2.0, including Google, PayPal, YouTube, eBay, Facebook, MySpace, Digg, LinkedIn, Twitter, and Flickr. But don’t confuse a viral loop with viral advertising or videos such as Saturday Night Live’s Lazy Sunday or the Mentos-Diet Coke Bellagio fountain. Viral advertising can’t be replicated; by definition, a viral loop must be.”

This is the process by which our cities will witness an economic, social and environmental renaissance. However, it does beg the question: Because this core loop is replicated repeatedly, how can you be sure to get the first one right? More tomorrow…