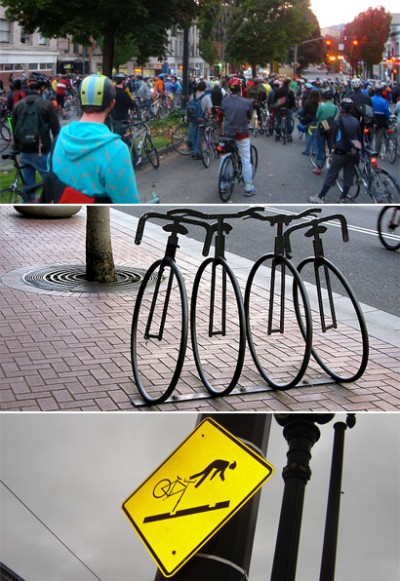 Already owning bragging rights to being the greenest city in the U.S. by one measure, Portland, Oregon believes it’s the most bicycle-friendly city as well. Their evidence:

– In the 1970s the state passed a bicycle bill requiring that all facilities be built with bicycle and pedestrian accommodations.

– In the 1990s, city councilor Earl Blumenauer worked to establish a bike program in the city, who has since become the leading U.S. congressman speaking on behalf of bike and pedestrian-oriented cities.

– Bike advocates (via the organization Shift) are playing a major role in organizing the first Towards Carfree Cities conference in North America.

– At the Carfree conference the City will introduce Sunday Parkways, where six miles of streets are closed to auto traffic on a summer Sunday from 8 am to 2 pm, Portland’s version of Ciclovia, an international trend originating in Bogota, Colombia.

However, it’d be tough to claim to title outright without a bike sharing program like Washington DC is getting…

Update to recent entry: The city took a major step in claiming the U.S. bike capital status by achieving a Platinum Bicycle Friendly Community designation from the League of American Bicyclists, one of only two cities (along with Davis, CA) to achieve that designation.