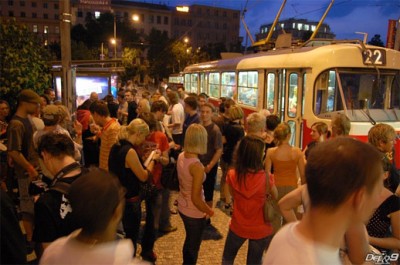 The nightclub streetcar circuits the Czech capital late at night once a month. What’s the big deal? From an experience economy point of view, one of the event’s organizers, Honza Komarek, states it best, “When you have a great track going and you look out the window and see Wenceslas Square (pictured left), the effect is just massive. People go crazy; everyone is screaming; everyone is waving; everyone is dancing.”

Tickets are about $18 for 60 ‘riders’. The pre-party chauffeur service takes off from a major train station and ends up two and a half hours later at one of the city’s dance clubs.