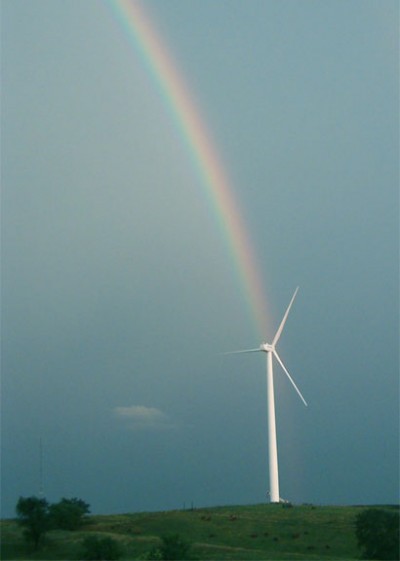 Rock Port, Missouri may only have a population of 1300, but it claims a title that no other community in the U.S. can – all of its energy is generated by a renewable resource. In fact, its four $90 million 1.25 MW wind turbines producing 16 million kilowatt hours annually leaves 3 million kilowatt hours in excess.

How was it financed?

That can best be explained via this CNN Money example involving five windmills, five farmers, and a total project cost of $10 million:

A creditor, like John Deere (extensive capital, farmer friendly) puts up $4,950,000. The farmers contribute just $10,000 each. The remaining $5 million comes from a bank loan.

The farmers’ cooperative secures a contract to sell power to a local utility, then puts up the wind turbines. The projects are usually fairly small in scale, say 5 to 10 turbines producing 7.5 to 15 megawatts of power in total, or enough to power about 5,000 to 10,000 homes.

Deere gets the federal production tax credit of about 2 cents per kilowatt hour and just about all of the proceeds from selling the power for the first 10 years.

The farmers get a maintenance fee of about $20,000 a year each for managing the turbines – keeping the access roads plowed, calling technicians for repairs, handling the paper work with the utility.

After 10 years, when the loan is paid off and Deere has recouped its investment plus profit, the ownership structure flips, with the farmers becoming majority owners.

What’s holding up other towns? The factories to build the huge wind turbines need subsidies to get off the ground, no different than our road system. Once the government extends a wind energy tax credit program for such production look for thousands of towns to join Rock Port.