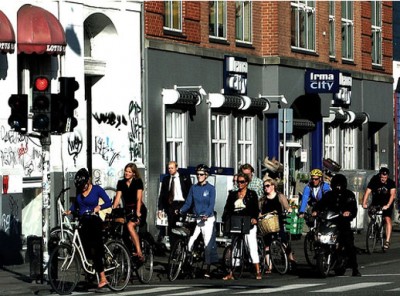 As you can see by the graph, bicycle production is enjoying a renaissance, increasing in each of the last six years while car production has remained steady in growth. Much of the recent growth has been driven by the rise gas prices as well as in electric bike production, which has doubled to 21 million units in the last three years. Since 1970, bicycle output quadrupled while car production doubled.

The city of Copenhagen (pictured) plans to invest more than $200 million in bike facilities between 2006 and 2024, estimating that by 2015 half its residents will bike to work or school (36% do today). The city of Amsterdam will spend $160 million from 2006 to 2010 on bicycle infrastructure.

The U.S. government will spend $900 million a year for biking and pedestrian infrastructure for 2005 to 2009, doubling bicycle and pedestrian routes in the 50 largest cities.

Unfortunately, China’s bike fleet declined by 35% from 670 million to 435 million 1995 to 2005, while car ownership more than doubled from 4.2 million to 8.9 million. Hopefully worldwide trends will catch up to China.