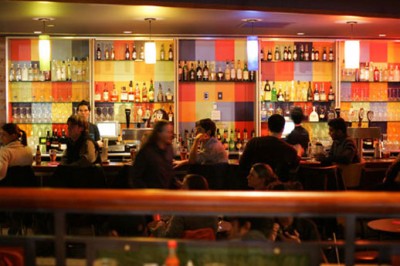 First you had email listservs/mailing lists where everyone receives everyone else’s messages to the group, which quickly compared to spam, followed by online message boards, but required thousands of users to make it work.

Then along came Web 2.0 with MySpace and Facebook, which established an international social network, trailed by Ning and CollectiveX which allowed anyone to create their own, supported by countless other collaborative tools. Mixed in with all of this is the fact that every major niche out there has an accompanying social network.

Thus, here are two that provide relevancy to building a community of creatives in a city or neighborhood:

Yelp! – Notice that it’s the user reviews/word of mouth that you pay attention to more than what the ‘experts’ or ads say? That’s all Yelp! is – a social network of reviewers and their reviews, organized around the restaurants and shops (mainly local independents) in a particular city or neighborhood. Unfortunately they only focus on a few major cities, but they’re growing fast.

Going – This is to events what Yelp! is to restaurants and shops. If there’s an ongoing event in your city (ie happy hours, mixers, fundraisers, art shows, etc.), this is the site to find out what, when and who’s attending them. Again, it’s limited to major cities, but it’s something to keep in mind.

These sites, especially Yelp!, are ravingly popular. Why? Their content is crowdsourced – it’s created by the people, for the people, and well, that’s what people are quite interested in.