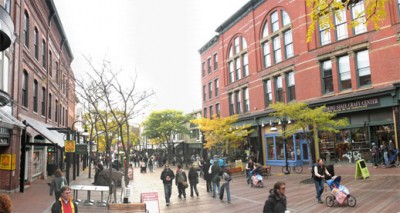 Near the top of many progressive, creatives‘ lists one will find San Francisco or New York City. Why? Because there’s raw excitement in living in a trendsetting city – experiencing the future in the present. From Smart cars to Yelp! to flash mobs – you’ll find them first, exclusively or most prevalently in such a city. So what’s the latest sign of things to come? Weekend pedestrian-only streets.

Spurred by an international movement to close major urban thoroughfares to cars and allowing only pedestrians and bikes (known as Ciclovia):

– The city of San Francisco is looking to establish Sunday Healthways, where streets in the Bayview, Tenderloin and Chinatown neighborhoods would be closed to cars on Sunday mornings in lieu of walkers, joggers, bicyclists and even practitioners of yoga and tai chi.

– The neighborhood of Williamsburg, Brooklyn will enjoy four Saturday afternoons in a row starting in June where its main street (Bedford) will be closed to automobile traffic. Many of the merchants are enthusiastic, knowing it will allow them to accommodate more customers with outdoor seating on the street. The impetus? Would you believe it’s the NY Department of Transportation, part of city’s PlaNYC 2030 initiative to create more streets as pedestrian public realms.