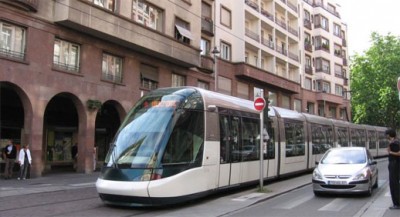 The NY Times illustrates this brilliantly in this vignette from their Gas Prices Send Surge of Riders to Mass Transit article:

Brayden Portillo, a freshman at the University of Colorado Denver, drove from his home in the northern suburbs to the downtown campus in his Jeep Cherokee the entire first semester of the school year, enjoying the rap and disco music blasting from his CD player.

He switched to the bus this semester because he was spending $40 a week on gas – half his salary as a part-time store clerk. “Finally, I thought this is stupid,” he said, and he is using the savings to pay down a credit card debt.

What’s next? The photo above displays the third option – the pedestrian. Covered a couple of entries ago here, progressive, creative residents in pedestrian-oriented communities are finding opportunities to achieve something they only dreamed about ten years ago… pedestrian-only streets.