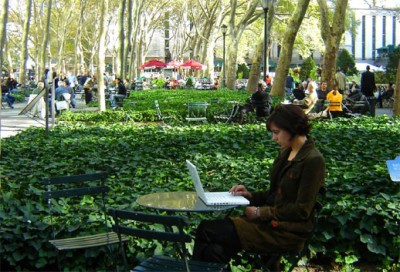 In 1956 the Federal Aid Highway Act ushered in the auto age, with the U.S. government funding 90% of the costs to build 41,000 miles of interstate highways over 20 years, an equivalent of $200 billion today. Highways are still being built, but they’re also coming down as cities are realizing that a digital infrastructure (ie the internet; wi-fi, fiber optic, cellular, satellite networks) negates a continued need for heavy asphalt investment, and at a much lower economic, environmental and social price. It’s no coincidence that the rise of a digital economy is being accompanied by a rise in pedestrian-oriented places.

President Eisenhower was inspired to legislate the highway act based on his experience as an army officer on a convoy across the U.S., “The old convoy had started me thinking about good, two-lane highways, but Germany had made me see the wisdom of broader ribbons across the land.” This is an interesting counter-perspective to the thousands of critics of the pedestrian-oriented transition that says we’re too Euro-centric.

The question is, who will be today’s Eisenhower who states, “The old networks had started me thinking about good, fiber optic cables, but cities around the world had made me see the wisdom of broadband wireless across the land… and executes the digital equivalent of the 1956 Highway Act.