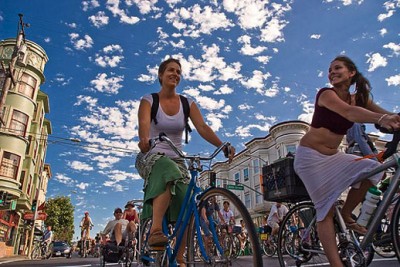 – The bands all carry their equipment via bicycle trailers.
– The audience arrives via bike, skate and foot. They then travel sequentially to each of the seven festival stops in different parts of the city.
– The 600-watt P/A system is pedal-powered, developed by Rock the Bike in Berkeley, which produces some pretty snazzy bike lights. They also cofounded the festival along with The Juice Peddler.

Check out more in their video.