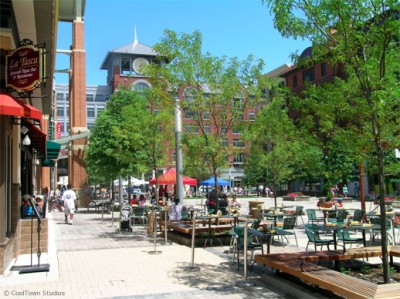 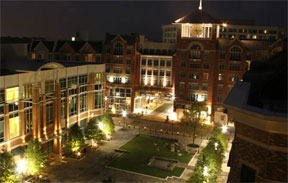 The $360 million, 15-acre Rockville Town Square has literally become the city’s center stage overnight, hosting concerts, movies, a farmer’s market and even a rock climbing wall. Being in the space feels right – it’s like an outdoor room, enclosed on four sides, filled with outdoor dining tables and trees that will transform the place as they mature. Two blocks from Washington DC Metro/subway, it features 108,000 s.f. of restaurants and shops plus a 100,000 s.f. library, with 644 condominiums in three stories above.

While far from having a true creative, organic vibe because it was built all at once involving one developer, thus the predominance of national chains, this is a major step forward toward seeing one of these within a natural cultural district.