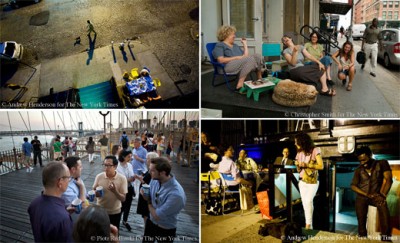 In one of the best NY Times articles ever published as it relates to what this site is all about, writer Penelope Green pens the phenomenon of creatives in New York City spontaneously crafting their own public spaces in The Dining Room Takes to the Streets. The photographs alone that are associated with the article are a must see, and some of the quotes are priceless.

Referred to as ‘invisible theater’, here are some examples of New Yorkers making their own urban gathering places (clockwise from top left):

– At her ‘Chez L’Hydrant’, Suzanne Seggerman hosts dinner parties for six or eight on the street in front of her building. People strolling by wonder if it’s a new restaurant and want a table.
– Reno, a comedian uses the loading dock of her building as a front porch, “I was on my loading dock one day and I called my dog and somebody actually shushed me, because her child was sleeping in ‘the fancy condo conversion across the street’. Then I felt bad that I told the lady to go back to the suburbs.”
– Another shot of Suzanne’s Chez L’Hydrant.
– Ten guests gather for a standing dinner party on the Manhattan-side tower of the Brooklyn Bridge. Passersby add to the festive atmosphere.

One of the most progressive agencies in the country, the NY DOT (Department of Transportation), again provides stellar leadership. Janette Sadik-Khan, commissioner of the DOT, “Public space is the glue that holds our city together and makes it worth living in. I always say the streets are the living rooms, so I guess that makes the sidewalks the front porches. We’re trying to remove the barriers to enjoying that space. The D.O.T.’s priority is safety [rather than use regulation]. If someone wants to use the sidewalk for a casual dinner, they just have to be considerate of the neighbors.”

Other cities, take note – if you want a culture and economy as rich and diverse as New York City’s, follow the NY DOT’s lead and you’ll manifest stories like this.