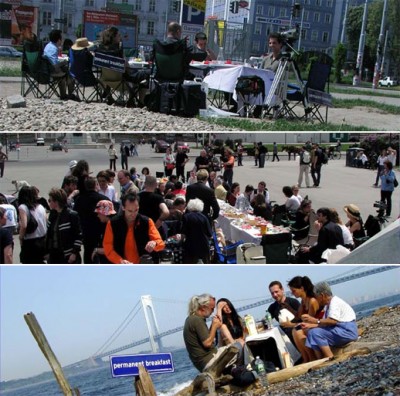 In keeping with the spirit of the previous entry, The Dining Room Takes to the Street, here’s how to start your own informal public dining culture with the Permanent Breakfast.

Founded in Austria, the purpose of the Permanent Breakfast is to promote public areas and places via spontaneous gatherings for breakfast. The very first breakfast was held in Vienna on May 1, 1996 among five people, and has since spread throughout the world thanks to its formal program with the basic rule:

One person plans a breakfast in a public space. Usually at least four of the invited persons commit themselves to organize another public breakfast with different persons in a different place as soon as possible.

Recommendations are that everyone is responsible for their own breakfast (or via potluck); interested passersby are invited to breakfast; and that organizers register their breakfast on the website so that it’s publicized and furthers the mission.

Think of the Permanent Breakfast as a less bureaucratic, more grassroots version of creating a social, dining scene in a public space that may serve as a model for a larger, more permanent destination, such as this dining scene in Siena, Spain.