You’ve heard about White Nights/Nuit Blanche and Long Night at the Museums in the previous entry, the all-night arts and culture festivals spreading around the world. The U.S. is ramping up with their own versions, with Chicago’s Looptopia May 2008, Sleepless Night in Miami November 2008, and Glow in Santa Monica July 2008.

Check out the video of Glow above, hosting interactive artful experiences in the historic pier district, like a kaleidoscope that reads your emotions; 950 glow sticks stuck in the beach to demonstrate the changing tide to a video projected onto a waterwall. What makes these art festivals truly unique is allowing the crowd to not only participate in the art-making experience (like the kaleidoscope), but as a collective group as well, such as a large-scale outdoor water mist projection that displayed wildly vivid colors and patterns created in response to the “competing and collaborative voices, music and screams of people nearby”. See images below. 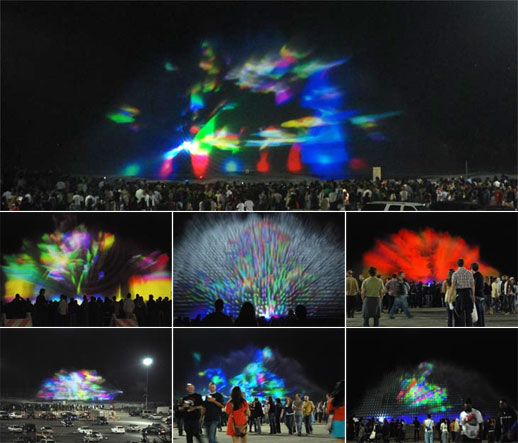