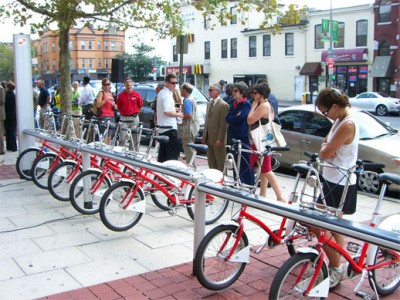 For a city with such a reputation for bureaucracy, it’s perhaps a sign of the new times that Washington DC is the first city in the U.S. to have a modern, city-wide bike sharing program, open for use as of August 13, 2008. It’s the same system used in Barcelona, and inspired by the 20,000 bike/1400-station phenomenon in Paris.

Ok, so the SmartBikeDC program at 120 bikes and 10 stations pales by comparison to Paris, but that’s 120 bikes/10 stations more than any other bike sharing system in the country. The annual fee is $40 for unlimited use as long as you return the bike after 3 hours, being able to rent a bike immediately after. It’s a better deal than the one in Paris where only the first half hour is free. However, be sure to return it within 24 hours otherwise you’ll be stuck with a $550 invoice.

One question you may want to ask is why are the bikes arguably so darn ugly? Well, who wants to steal an ugly bike?