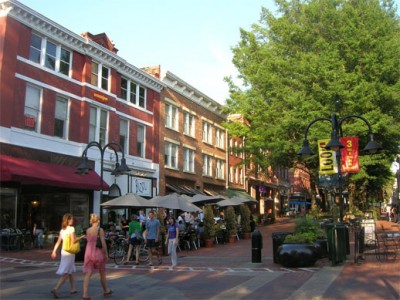 Continuing our look at the best cities that are remixing, reinventing themselves, according to Best Towns 2008 from Outside magazine, here are five more, plus a number of honorable mentions:

Ithaca, New York – Conscientious innovation isn’t far off when you have Cornell University and Ithaca College as residents, and a median age of 22. The town is experiencing a green movement spearheaded by a new ecovillage, and the downtown is finally legitimizing the pedestrian-only district laid out a few decades ago.
Louisville, Kentucky – Much of the positive change in Louisville is being experienced by bicyclists, with new bikeways and bike lanes announced. The downtown is still not quite a creative hangout, anchored by a corporate entertainment center, though nearby Bardstown a couple of miles away definitely is.
Eureka, California – It has become the quintessential wilderness arts town in the middle of nowhere, gathering the community of 27,000 around a new five-block boardwalk.
Columbia, Missouri – First came an indie film house, then a film festival, then artist lofts, studios and cafes, combined with over 200 miles of bike trails, have made Columbia a southern outdoor activist’s haven.

Oxford, Mississippi – Fueled by its university, Ole Miss and a renowned Double Decker Arts Festival, held each spring and a mayor who runs a local indie biz.
Oakland, California – Oakland’s mayor in 1999, Jerry Brown, is making good on his promise to attract 10,000 new residents downtown.
Sacramento, California – A 240-acre redeveloping brownfield will nearly double the downtown district with 12,000 new homes, and a new 197-room boutique hotel, the Citizen, was named by Sacramento citizens.
Corvallis, Oregon – The second U.S. city (after Moab) recognized as an EPA Green Power Community, with a focus on wind and geothermal power, with a new riverfront park.
Wilmington, North Carolina – The “Wilmywood” filmmaking economy, North Carolina’s Hollywood, has helped direct scenes of a vibrant riverwalk and a historic district over 230 blocks.
Seattle, Washington – Mayor Greg Nickels has signed more than 850 U.S. cities to his U.S. Conference of Mayors Climate Protection Agreement, higher than Kyoto Protocol objectives, and calling for car free Sundays in August.
Charlottesville, Virginia – Boasts one of the most successful, largest pedestrian-only streets in the country (pictured), and one of the most comprehensive GIS-based urban tree programs.
Brattleboro, Vermont – Home to one of the largest farmers’ markets in New England, Community Supported Agriculture (CSA) farms, a predominance of locally-owned businesses, and resident-held nightly potluck dinners, Brattleboro is a sign of things to come.