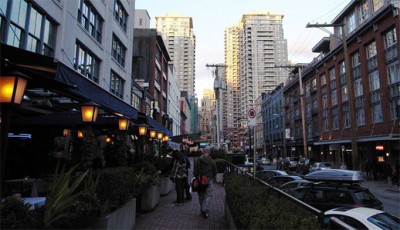 Today’s entry is part of my favorite series on this site, ‘Reader Experiences‘. Profiling Vancouver in this story is Luke Graven from Portland, Oregon.

“There has been much written about Vancouver, Canada being a great city. This British Columbian city has been ranked the number one city in a row by the Economist magazine survey. Here are 5 reasons why it ranks high from a CoolTown perspective:

1. It’s walkable. Smart Growth principles have been in place for decades. The city council even prevented the construction of freeways in the 1980s. I can remember the first time visiting and being annoyed having to drive through the downtown to get to Whistler. Now I realize that’s the same reason the downtown is full of activity.
2. Its free lifestyle. Two examples of this would be the ‘clothing optional’ Wreck Beach (conventially located within walking distance to UBC) and the decimalization of marijuana in Canada [it’s a fact, nothing more, nothing less]. I was at a conference at UBC and afterwards took a walk down to Wreck beach. We then proceeded to get naked, go swimming, and watch a great sunset. While there I saw a guy in a suit walk down, get naked, smoke a —, then go swimming. That was a very Vancouver moment!
3. It’s large gay/lesbian community. Often referred to as the ‘San Francisco of the North’. Growing up there, the Gay community was just part of the city. As simple as that.
4. Attainably-priced housing. Vancouver housing is expensive, so the City government encourages legalized secondary suites and cooperative housing. I know a few friends who live in co-ops downtown – if the government did not step in they could not live the urban life they do.
5. Extensive street-car system. Started in 1890, it is being upgraded with the CanadaLine that will link the airport with many spots in the downtown area. I can remember growing up and one of the first signs of maturity is if you knew the bus system. My high school friends would wear it like a badge of honor. I also remember taking the SkyTrain all over to go skateboarding. It’s a great feeling to be young and not stuck at home.”

If you have a reader experience or a story suggestion, post it here on the CoolTown social network.