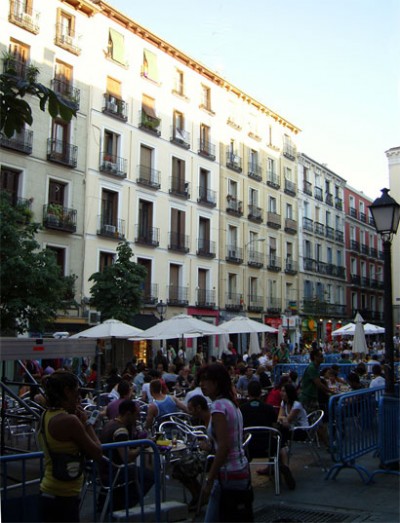 Residents in the U.S. revel in block parties, whether they’re urban like Adams Morgan Day or residence-based in the burbs. It’s a time when you can roam the street freely without having to look both ways, and enjoying the street as one giant festive patio.

Still, having a block party in the U.S. is typically a major pain in the —, where the city government and police department must be notified and involved. Imagine that though, U.S. citizens have become used to the fact that they need the city government and police department in order to have a neighborhood gathering. Kind of ironic? So what’s the alternative?

See the photo of the Plaza De Chueca, Madrid in Spain. The reason why government entities are involved is the city needs to be legally transformed from a car-prioritized street to a pedestrian-only one, but what about one that’s already pedestrian only? That’s right, not only won’t you need a bureaucracy to approve your party, but you could have one everyday, spontaneously, informally. Isn’t that what life should be about?