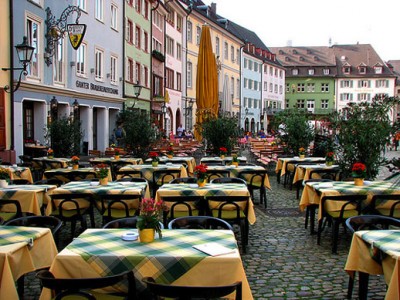 The online world centers around conversation, via discussion forums, chat rooms, comment threads, Facebook’s ‘Walls’… many of these mediums didn’t exist ten years ago, even five years ago. That’s not difficult to fathom, given that today it doesn’t take more than five minutes to set up an online community with all these things. However, an internet minute is equivalent to a real estate year, so if you’ve subconsciously wondered why walking through your built environment lacks the spontaneity and enthusiasm of surfing the net, that’s because it hasn’t been manifested in the real world… yet.

An initial question is, what would that look like? Virtual discussion forums consist of a regular community of people with like-minded interests that freely converse in a common place. A physical version of that would be presented in two ways:

1. A regular community of people within a physical community that freely converse in a physical public forum, such as a piazza, plaza, courtyard or square, at the center of where they’re most likely to cross paths, such as the center of downtown. However, they need to be provided with a myriad of dining and drinking choices via outdoor tables because food is the one thing that brings people together, and it supports the economic vitality to keep the place vibrant and fresh.

2. A regular community of people with like-minded interests that freely converse in a third place, such as a coffeehouse, cafe, pub, rooftop hangout, with both an ongoing series of events that support those interests which eventually lead to spontaneous encounters in between. It’s the latter that sparks the notion that there’s a real sense of community going on here, and an innate sense of enthusiasm that you can’t get online.

It helps to be social network bilingual in both the virtual and physical world.

How do you see the social dynamics of the virtual world transformed into your physical world?

Image: A cafe-lined square in Freiburg, Germany by Jassy-50.