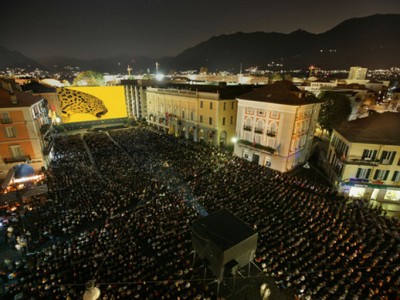 We’re familiar with the term ‘movie going’, as in going to the movies, but what about those who want a little more socially fulfilling? Every evening in Locarno, Switzerland’s Piazza Grande, during their annual 10-day Locarno Film Festival in August, 8000 participants movies are treated to a film on a massive scale.

Combining an original art experience presented on a four-story screen, set in one of the most beautiful piazzas in Europe (especially when lit up at night, in and of itself, a sculptural masterpiece), you can be assured people won’t be rolling in 10 minutes before the presentation and immediately after. In fact, being that it’s a festival in the heart of a city, many will be staying in the vicinity the entire day, as well as frequenting the myriad surrounding outdoor cafes after.

Think of it as an artful alternative to a sporting event, or going to the cineplex for that matter.

Do you think your city or neighborhood should have such a movie staying experience, albeit on a smaller scale?