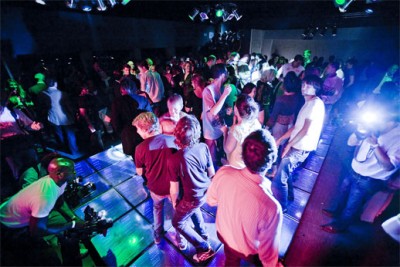 September 2008 is a landmark day for anything having to do with green dance clubs. That’s the launch month for both Club Watt in Rotterdam, The Netherlands and Surya in London, both being presented as sustainable/ecological dance clubs featuring a floor that generates energy from the people dancing on top of it.

It’s been talked about since 2005 by a group now referred to as the Sustainable Dance Club, formed by a group of Dutch ecological inventors, engineers and investors using a technology called ‘piezoelectricity’, based on the dance floor panels having about a centimeter of play.

Each dance club has a different company behind them – Sustainable Dance Club developed Club Watt, and Club4Climate created Surya. A little bit of competition may be healthy. For the ecological record, Club Watt claims 30% electricity reduction and 50% water, waste, CO2 reduction, and Surya says the floor will eventually produce 60% of the club’s electricity. At Surya, tables are made of magazines, the walls out of old mobile phones. Both have waterless urinals and toilets using rainwater.

Read about the technology in the New York Times, Partying Helps Power a Dutch Nightclub, and check out a video explaining Club Watt’s eco features.

Thanks to Marianne Drowne for the reference.