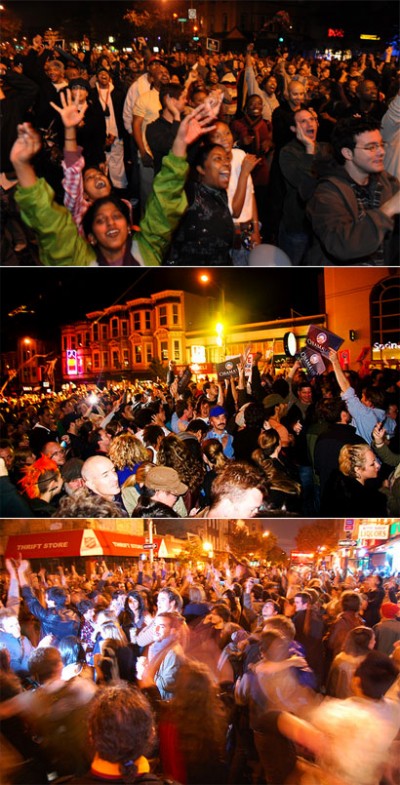 This site is by no means a political platform, so understanding that, one had to be there in the streets of downtowns across the U.S. after the final voting results to understand that this was more than just another election. The joyous dancing, the spirited cheering and chanting, the intense hugging, the endless laughter and tears, a generosity of love in the air… you’d think you were either in Berlin when the Wall had just fallen, or for sports fans, your country had just won the World Cup.

Why are they so infused with enthusiasm and happiness? If you’re skeptical about whether or not this article describing these scenes across the country isn’t partisan, you’ll want to read the nonpartisan business articles from Fast Company magazine, How Obama Won It With the Web and The Brand Called Obama: Win or lose, Barack Obama’s rise changes business as usual for everyone. Here’s why. The stated fundamentals for success are strikingly similar to the tenets of why crowdsourcing generates so much passion and enthusiasm. Some of the lessons…

Lose control – Trust and let the people message what you’re about.
Embrace the modern internet – Every Web 2.0 tool was used, and even pioneering new ones, such as a micro-funding tool to raise money among your own friends and constituents. This will be an invaluable tool in crowdsourcing.
Cast a wide social net – Build communities of support with other online social networks, not just your own.
Let fans be real – Many of the most effective messages were created by supporters, not the campaign itself.
Be open (but not totally) – Open source means people are allowed to know what’s going on, but of course, not everything.
Lead, don’t boss around – Get people to do things on their own, not because they have a contract, known as ‘adaptive leadership’.

As an example of the above, here’s a message from the campaign after the results were announced, “We have a lot of work to do to get our country back on track, and I’ll be in touch soon about what comes next.” Since when does a president-elect care what individuals think once they’re elected? Wouldn’t you like to get a similar message from the organization or company you work for, or even your government? We’ll see…

Update: Within 24 hours of the election, Obama launches web site to reach public.