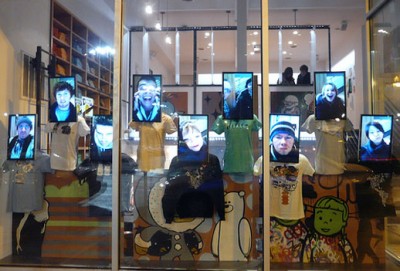 What do t-shirts have to do with creating places? Since we were recently on the subject of t-shirts that expressed the love of certain places, it’s a good segue to profile a crowdsourced t-shirt company that’s a favorite of creatives.

In 2000, student Jake Nickell was feeling the priceless euphoria of having won a t-shirt design competition. Why not let others in on the emotional high? He presented the idea for a t-shirt company based on such a competition to future partner Jacob DeHart, someone he met on an online design forum. Starting with $1000, they held the first competition within months and Threadless (a play on an online discussion ‘thread’ as well as clothing) was born.

Anyone can upload their t-shirt designs to the site, where the community rates them from 0 to 5. Based on the ratings, the staff selects about ten designs among the 700 or so every week. Each winning designer receives $2000, plus $500 for every reprint. At $15 a shirt, the company makes $20 million a year on just 20 employees, and has sold out of every single shirt ever produced.

Now the question is, can this be applied to the creation of places? The short answer is yes, though of course not literally. However, if truly crowdsourced effectively, every square footage of office or retail space would be leased, every residence would be sold before construction was completed. Because shirts can be mass produced and desired buildings aren’t, the analogy works in a scenario where, say only ten exclusive shirts are produced at a much higher price. In the next entry we’ll look into this in detail.

Read more about Threadless in Inc.

Image: The Threadless store in Chicago, with video displays of its customers paired with the shirts, photo by ozmodiar.